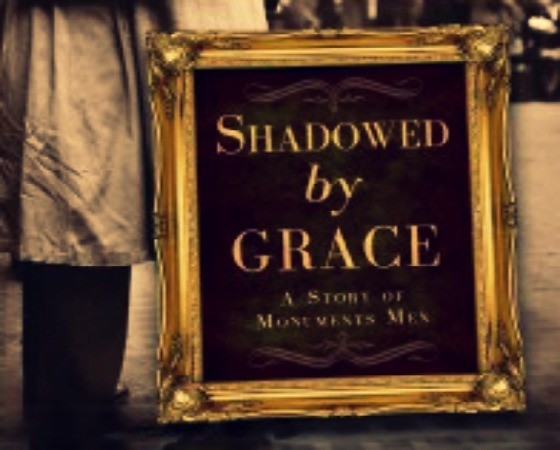 Today, our Guest Author is Cara Putman, who agreed to chat with us about The Birth of Book Ideas and share with us her creative process for her newest book, just released this month–Shadowed by Grace. 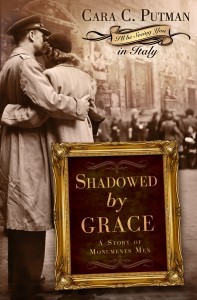 When a book is born, there’s a scary moment, hour, or week. As an author, I sit at the computer with the germ of an idea, a blank document page, and a blinking cursor. Somewhere, somehow, I have to find 90,000 words that will communicate a story that will captivate me…my editors…and eventually readers.

And it all starts with a blinking cursor on a blank screen.

Really it starts before then.

A germ of an idea comes from somewhere.

For Shadowed by Grace, that spark came when I saw a non-fiction book at the library. All it took was the cover photo: a clearly WWII soldier holding a painting. As I read some of the stories of the Monuments Men, my imagination began spinning questions. What would it be like to be a sculptor, museum curator, or architect who joins the army to help protect art and architecture?

Many of these men were not soldiers, but others had been in the reserves. Some came in as privates after basic training, others as officers because they’d already been in one of the services.

Still a fascination won’t be enough to fill one page let alone more than 300 pages of a novel. But as I play with an idea, eventually characters show up. When a hero or heroine arrives, I play with them until I know what his or her journey will look like. With Shadowed by Grace, Scott Lindstrom showed up first. Once I knew who he was, I started developing a heroine who would compliment and challenge him. I didn’t expect the book to become Rachel’s story.

And eventually, if I come back to my computer often enough the story is written and makes its debut into print and e-versions.

Rachel Justice is desperate to save her dying mother. She doesn’t want to leave her, but she accepts her newspaper’s assignment to travel to Italy and photograph war images. No one knows her photography is a cover and that Rachel is really seeking to find the father she never knew, hopeful to get some help with her failing mother. Dedicated to her mission, Rachel is focused on completing it. Soon, though, she finds her priorities and plans changing when she is assigned to Lt. Scott Lindstrom, on mission as a Monument Man. Their meeting will have far-reaching consequences. Will this derail her plans? Will she ever find her father? Is her faith enough to carry her through?

You can purchase Shadowed by Grace, at Christianbook.com, Barnes & Noble, Amazon, Lifeway, and anywhere else books are sold.

CONGRATULATIONS to Dana McNeely who won the signed copy of Shadowed by Grace.